The last president election was a stunning political upset when Donald Trump, a billionaire businessman won in a political coup, with no experience whatsoever. But along with this outsider, on the night of his victory, longtime conservative operator David Koch was standing, and smiling, amid a throng of revelers on the eve of November 8, 2016.

In her electrifying and much-lauded, bestselling book, Jane Mayer reveals that the era of the Koch brothers and big money in American politics is far from over, despite how much discussion there is to the contrary. Rather, the secret figures behind the moneyed American oligarchy continue to wield tremendous influence over the political agendas of the Trump administration, the Republican Party today, the radical Right, and all corridors of power in Washington.

“Jane Mayer . . . is, quite simply, one of the very few utterly invaluable journalists this country has.”
—Esquire

“Absolutely necessary reading for anyone who wants to make sense of our politics.”
—The New York Review of Books

“Deeply researched and studded with detail . . . Seems destined to rattle the Koch executive offices in Wichita as other investigations have not.”
—Washington Post 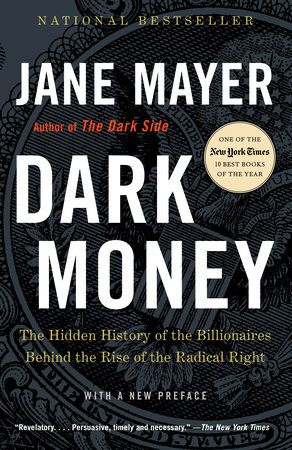 NATIONAL BESTSELLERONE OF THE NEW YORK TIMES 10 BEST BOOKS OF THE YEARWho are the immensely wealthy right-wing ideologues shaping the fate of America today? From the bestselling author of The Dark Side,… END_OF_DOCUMENT_TOKEN_TO_BE_REPLACED

A revelatory, inside account of Ronald Reagan's entanglement in the Iran-Contra affair during his troubled second term, Landslide was described by the Los Angeles Times Book Review as "a model… END_OF_DOCUMENT_TOKEN_TO_BE_REPLACED